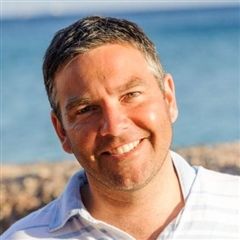 Graduating Class: 1984
Current Position: Innovation Sr. Director, West Practice Lead at Salesforce
Current Location: San Francisco, CA
Education / School 1: Dartmouth
I’m not quite sure when exactly it dawned on me that the education I was getting at EB was something special. Maybe it was the day I “helped” a gaggle of devoted fathers, including my own, build the jungle gym in the Big Yard. Maybe it was on one of those countless bank-turns I made in Creative Movement
class, running around the multi-purpose room pretending to
be a helicopter or a motorcycle or a biplane. Or perhaps it was the day our English teacher Jan brought her wolf cubs into class for the day.

What I do know is that I left EB feeling part of a warm and
dedicated community with an intuition for how to fuse academic rigor with creative problem-solving. And it is precisely this sense of intuition, even more than having been raised bilingually, that has guided me ever since.

While stuck in line buying books at the beginning of my sophomore year at Dartmouth, I began flipping through the pages of a Neuropsychology textbook whose colorful PET-scan- bearing cover had caught my eye on a nearby shelf. The mere idea that a system as complex as the human brain (a system in our own heads, after all) could be understood through a fascinating mix of cutting-edge science and creative speculation had me smitten. I changed my major that afternoon.

It wasn’t until the last week of my senior year that I began to consider what I might do with such a major. That’s when one of my professors asked for a show of hands for whom
among the class would be attending medical school in the fall. And in that moment, when I should have felt like I’d made some egregious error in foresight, I sat there smiling with my hands in my lap, filled to the brim with an irrational confidence that things
would work out. I had followed my heart; what could go wrong?
As it happens, this thing called the Internet came along.

Within months of graduating, I had been hired as a coordinator for an international photojournalism project called 24 Hours in Cyberspace whose aim was to document in a single day
(February 8th, 1996), the many ways the nascent World Wide Web was beginning to change people’s lives. I had been hired as a gopher but when word spread of my francophone background, I suddenly found myself on the phone to Senegal helping
arrange assignments for the well-known photographer Yann Arthus-Bertrand.

It was during these conversations with far-flung correspondents that I realized how incorrectly we had set up the process back in San Francisco to receive their images and text submissions in
order to turn them into stories and publish them online that same day. With a knack for common-sense problem-solving, I jumped
in to help. One thing led to another and before I knew what had happened I had been hired as an interface designer for a Silicon
Valley start-up.

To be honest, I’m not sure I knew at the time what an interface designer was. Over the next three years, in between overzealous ping pong matches and late-night Indian food deliveries, I cut my teeth designing our flagship product, NetObjects Fusion, which allowed normal people with little technical knowledge to produce complex web sites. I had such a good time doing it, my boss and I quit in 1998 and founded our own interface design firm in Mill
Valley where I remained until last year when I left to attend a graduate course in Interaction Design in Ivrea, Italy (former headquarters of Olivetti).

Now as my wife and I return to settle in the Bay Area and start thinking about having children of our own some day, I marvel at the fantastic gift my parents gave me by helping form Ecole Bilingue. All we need now is to find a house in the Bay Area with a yard large enough to raise wolves.
Back