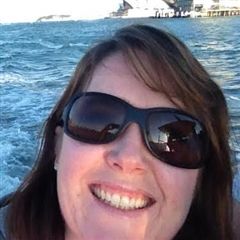 Graduating Class: 1983
Current Position: PR at the Australian Trade Commission (aka Austrade)
Education / School 1: College Preparatory School in Oakland, Hamilton College
You never know where life will take you... or what hemisphere you’ll be living in, and I certainly didn’t anticipate calling Australia home (for now) while I was at EB in the early 80s.

After graduating from EB in 1983 at the end of 5th grade (as there was no middle school at the time), I spent 6th through
8th grades at FAIS in San Francisco with other EB graduates. Then it was onto College Preparatory School in Oakland for high school, where I continued French and Spanish classes as part of my curriculum.

After CPS, I ventured east, attending Hamilton College in upstate New York. Beyond the geographical shift, it was a huge cultural
change being on the east coast and stepping outside the liberal haven that is Berkeley. There, I continued to study languages,
incorporating French and Spanish into my major of Comparative Literature. I also had amazing opportunities to spend a summer
in Spain before spending a year in Paris during my Junior Year Abroad. Hamilton has a well-established program in Paris,
including deep affiliations with the Sorbonne and Sciences Politiques among other academic institutions; it was a very rewarding and enriching year.
After graduating from Hamilton in 1994, the question was, “What do I do with my life now?” (I think many liberal arts majors
ask themselves this...). I came back to California and dabbled in a few internships with a publishing company and with the local CBS affiliate (KPIX), then worked for a French travel agency, did some more traveling and then ‘fell into’ a job with a high
tech public relations firm. It was 1996, and the technology boom was on the horizon. Silicon Valley was buzzing with opportunity, promise and infinite confidence in technology, most of which was ‘vapor ware.’

Having traveled throughout my life, I felt that there was something more I needed to do: a trip around the world. A good friend of mine and I decided to embark on a travel adventure in July 2001 for three months. Unfortunately that meant leaving my job, but to me, traveling seemed too important and a life experience I would never forget (and the Internet boom was coming to an end). So off my friend Laura and I went to Thailand, Cambodia, Vietnam, Bali, Egypt, Morocco, Spain and France. Being bilingual helped more often than not in many of these countries. It was an amazing trip...until the end, when we experienced September 11, 2001 while in Seville, Spain,
and felt that the world had changed forever.

Upon returning to San Francisco in October 2001, I found the job market quite daunting. Gone were the boom days and
post 9/11, everything was uncertain. I decided to do some volunteer PR work for an organization in San Francisco, which grants dream trips to AIDS sufferers.

During a trip to Lake Tahoe in December 2001, I met the man who would become my husband three years later, Peter Stumbles. The only hitch was that he lived in Australia. He was on his way back after spending a year in San Francisco on transfer from the Sydney office of an American management consultant company. I began working in a consumer PR firm, doing product launches for wineries, high end hotels, and restaurants. After a visit Down Under and much debate, I decided to take the leap and move to Sydney, Australia. One of my closest friends and fellow EB
alumnae, Shauna Finnie, reminded me that we always dreamed of living in Australia, after seeing The Man from Snowy River and
hoping we could have pet koalas in our backyards.

I moved to Sydney in March 2003 and have loved living here. I compare Sydney to a mixture of Europe and California, with
an extra laid-back feel. Peter and I were married in September 2004 in Yountville, then took an extended honeymoon in
France before coming back to Sydney. I started working again in public relations, most recently for the Australia government
at the Australian Trade Commission (aka Austrade), which encourages Australian businesses to ‘give it a go’ and export their products and services globally. It was nice to be ‘in-house’ and part of a media team with a global reach after years of working in PR firms. Austrade is one of the most dynamic ‘companies’ I’ve ever worked for, in spite of its government status. I loved the international outlook and environment—there were always people visiting from all over the world, talking about how we could get Vegemite into supermarkets in India and Aussie swimwear into US fashion shows.

Over the years, I’ve kept in touch with many of my classmates from EB, and have been inspired by their accomplishments. It’s
quite special to have these connections last so long and be so deep.

It’s now the end of a very long, hot and humid summer; Autumn is around the corner (I still can’t get used to thinking of April as an autumnal month, and October as the beginning of spring!) Rugby season is about to begin, while cricket season has all but ended. Melbourne is hosting the Commonwealth Games; sports are huge down here. I’ve now stopped working as Peter and I are expecting our first child in just a few weeks. It’s an exciting time—albeit daunting—and we are looking forward to welcoming a wee Aussie-Franco-American very soon. I’ve started researching French bilingual schools here and am discovering an extensive French community. I hope that our child will benefit from the precious language and cultural education I received, beginning with EB.
Back